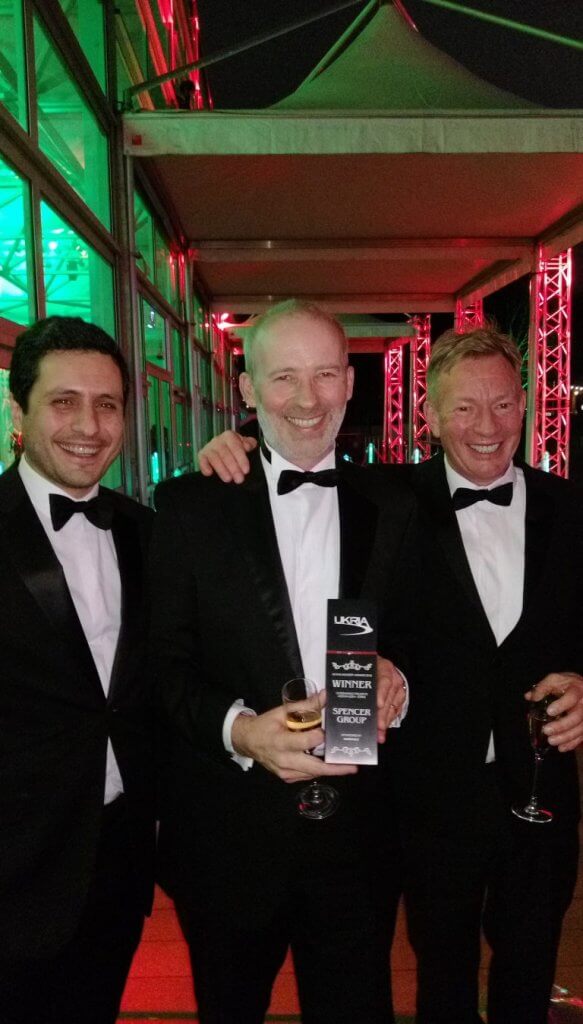 Rail infrastructure specialist Spencer Group has claimed a major industry award for an immensely complex and challenging project that will transform the experience of passengers using one of London’s busiest underground stations.

Spencer Group claimed the Outstanding Projects – Medium (£3m-£20m) category in the prestigious UK Rail Industry Awards 2018 for a scheme to achieve step-free access to platforms at Finsbury Park, one of the oldest and most used stations on the London Underground.

The award recognised Spencer Group’s safe and successful delivery of an extremely high-risk project which involved the sinking of two new lift shafts, the construction and refurbishment of staircases and the extension of an existing, disused passageway.

The project had all the hallmarks of an intricate mining scheme, with a series of careful excavations and Spencer Group teams working with incredible precision deep below the streets of the capital.

Construction of the lift shafts was carried out just inches from the live East Coast Main Line and Tube tracks and included mining by hand, exposing and installing temporary supports against the running Underground platform tunnels, followed by the installation of permanent structures.

Despite the challenges of working in confined spaces within the foundations of a station dating back more than 100 years, Spencer Group delivered the project with no unplanned disruption to rail services.

The improvements delivered by Spencer Group will double the capacity for travellers and reduce congestion by enhancing connectivity from ground level to the underground Victoria and Piccadilly Line platforms. Passengers will have more space and journeys through the station will be quicker and more pleasant, while the station will be accessible for the first time for wheelchairs, prams and buggies.

The UK Rail Industry Awards are the biggest and most prestigious celebration of excellence in the industry, bringing together leaders and decision-makers from across the sector. Hosted by comedian and actor Rufus Hound, the event at London’s Battersea Evolution events venue featured a keynote speech by HS2 Chief Executive Mark Thurston.

Spencer Group’s entry for the Finsbury Park project beat off stiff competition from the likes of Network Rail and construction giant Balfour Beatty for the award.

Spencer Group’s capability and performance was also recognised by the company being shortlisted in the same category for another flagship project – a £20m scheme to extend and enhance Great Western Railway’s Long Rock Depot at Penzance in Cornwall. This scheme was delivered while enabling the depot to continue functioning as normal throughout construction, day and night.

Glen Smithson, Operations Director at Spencer Group, said: “We’re proud of our work at Finsbury Park and delighted it has been recognised with this prestigious award.

“From the outset we committed to ensure the station remained fully operational throughout the works and we achieved that objective, while delivering improvements that will benefit commuters and other travellers for many years into the future.

“This project, and others such as at Penzance, showcase the safe, innovative and collaborative approach we take to the successful delivery of demanding engineering challenges.

“Our ambition is to become the contractor of choice for complex, multi-disciplinary and high-risk projects in the rail industry and our other key sectors and this recognition underlines our credentials to achieve that status.”

Spencer Group is one of the UK’s largest privately-owned engineering businesses and the UK Rail Industry Award underlines the company’s reputation across the rail industry and other sectors, such as energy and materials handling, for exemplary performance, innovation and collaborative working.

Spencer Group Project Manager for Finsbury Park, Menelaos Lydakis, added: “This award is a great tribute to the project team and the excellent relationships we forged with the London Underground and Network Rail teams to deliver this project under extremely challenging conditions.

“We’re very proud that we minimised the impact on the service to travellers. In fact, our approach to the project has meant it has been business as usual for one of the busiest stations outside zone one of the London Underground, for the full duration of the project.”